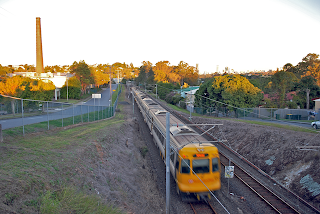 Take a nostalgic trip on one of the Southern Hemisphere's most historic, and not particularly long railway journeys, the Ferny Grove Heritage Railway. Relive your Brisbane childhood by travelling on 40 year old EMU trains*, and bashing your head on those weird handrails hanging from the ceiling. Whilst the old door handles have been replaced by push buttons, we have made sure that at least two consecutive door sets on each side of the train are broken and locked so that you miss your station when trying to alight.

The Ferny Grove Heritage Railway journey starts at Bowen Hills, and the train quickly climbs up on one of the most impressive viaducts in Bowen Hills. From there you can see people getting eaten to death by sandflies on the bike path alongside Breakfast Creek. The train then continues to climb towards Windsor. No, not the one where the Queen lives, but there is a charming wooden footbridge, and the smallest house in Brisbane. Passing through Wilston, you can sometimes be entertained by people running for the train through the subway. The train only gets held if the are female and pretty. 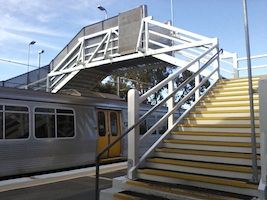 Hear the DC motor struggling as the EMU train ascends the lofty foothills of Newmarket, crossing the first of many ancient level crossings on this line, passing an old brickworks chimney, Newmarket Olympic Pool, and onto Alderley. You can change here, if for some bizarre reason you want to take a bus to Aspley Hyperdome. Next stop is Enoggera, where you can view a rarely used dystopian bus interchange. Buses are so infrequent, you may occasionally see a dinosaur being removed from a bus stop. Crossing Sandy Creek, and onto the curves of Gaythorne (previously known as Rifle Range). This station is so curvy, that the NGR trains are banished.

Next stop is Mitchelton and Oxford Park, not much to see there since the Swiss restaurant closed down. The train then continues to climb to the highest altitude on Queensland Rail's network at Grovely. If you are expecting oxygen masks to drop from the ceiling, you might be disappointed, but you can bring your own. After passing through Keppera, quickly, the train descends in altitude, where you can watch retirees hitting balls with sticks on Keppera International Golf Links.  The train crosses not one, but two level crossings, plus a tributary of the mighty Kedron Brook on its final approach to the modern Ferny Grove station.

At Ferny Grove, you can either walk across the platform and get the next train out (remembering to touch on and off), or eat a packet of chips from the vending machine whilst marvelling at car park utopia.

The Ferny Grove Heritage Railway is a fun ride for all the family day, and night. Queensland Rail even offer a Ghost Train tour, the 6:40am from Ferny Grove to Park Road, as this train rarely makes it to its intended destination.

* note: Heritage EMU trains may very rarely be swapped for a train at least 10 years old at short notice, but don't worry you won't end up on one of those mouldy new NGRs.

Posted by BrizCommuter at 10:07 PM No comments:

Cross River Rail's (CCR) advertising slogan "More Trains, More Often" was recently replaced with
"Transforming the way we travel". This is no surprise to BrizCommuter and other rail experts who have questioned CRR's ability to significantly increase trains services throughout SE Queensland in its current form, since project iterations and budget cuts removed critical infrastructure required to maximise the effectiveness of CRR.

Unlike new train tunnels in London, Auckland, Sydney, and Melbourne, where the proposed peak train services frequencies (in trains per hour per direction - tph) are publicly available, this information is unavailable for Cross River Rail. Whilst such a map was available in the Cross River Rail business case, changes to the track layouts at Mayne (near Bowen Hills) mean that the diagram is now out of date, with line pairings and expected train service frequencies no longer possible.

As the Cross River Rail Delivery Authority is keeping things hidden from the public, rail enthusiasts have had to step in to create a chart of expected line pairings are shown on the base image, helpfully created by Rail Back on Track member timh. BrizCommuter's expected line pairings, and maximum possible 2025 am peak inbound frequencies (based on currently funded or expected infrastructure) are as follows:

It is quite likely that due to insufficient trains, train crew, funding, and lack of political willpower that some of these frequencies may not be possible in 2025.

"More Trains, More Often" - you can see why the slogan was dropped!

Posted by BrizCommuter at 8:56 PM No comments: 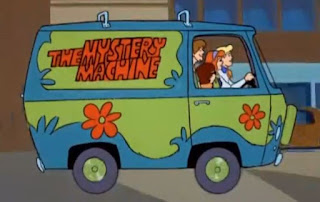 Brisbane's Cross River Rail (CRR) project has suffered from lack of transparency, notably the lack of rail operations plan since various project changes, made the original rail operation plan impossible. Project Change 11 has just been announced (more on that later), but Project Change 10 is missing in action. Most station plans related to Dutton Park have also gone missing in action.

Can the Cross River Rail Delivery Authority (CRRDA) and Queensland Government please come clean on what is happening with Dutton Park station? Is it going to be moved to the South, onto a straight section of track? Will there be property resumptions? Or will Dutton Park station be removed completely, noting the improved access from Boggo Road/Park Road station to Princess Alexandra Hospital? Keeping the public quiet isn't the best solution.

Project Change 11 has some improvements over the layout of Moorooka Station and adjacent Clapham Stabling Yards. The additional 3rd platform at Moorooka Station is now located next to the existing platforms, and this has been enabled by a raised grade-separated track allowing trains to access Clapham Yards without conflicting movements.

Unfortunately, it is mentioned in Project Change 11 that up to 24tph is to be operated in both directions. This pretty much confirms the failure of CRR in adding significant capacity to SE Queensland's Rail Network. Currently, the tracks through South Bank can handle 24tph, with 20tph operated due to multiple network constraints (notably turnback constraints on the Cleveland and Beenleigh Lines). Gold Coast and Beenleigh Lines will be diverted via CRR, providing up to 24tph between Yeerongpilly and Dutton Park, 12tph more than currently. However, this also needs to be shared with the future Salisbury - Beaudesert Line which is likely to require 6-8tph in the am peak. This leaves just 4-6tph additional train paths for Gold Coast and Beenleigh Line services, and only if improved infrastructure is constructed (such as additional turnback capacity).

CRR does allow for Cleveland Line services to be enhanced, as this line will now have free rein of the tracks through South Bank. However, Cleveland Line services cannot be increased unless there is at least a partial duplication and additional turnback capacity at Manly or Lota. There is no sign of this happening any time soon. Thus at opening, Cross River Rail may only add a handful of train services from the South into Brisbane - hence the dropping of the "More Trains, More Often" slogan. Not really worth the $5.4b cost! Had the Dutton Park to Salisbury section been constructed with 4 tracks (as per the original plans for CRR) allowing for both via CRR and via South Bank services, then another dozen train services could have been added.