So what are the advantages of making commuters pay for station parking?
With Brisbane having a chronic issue with full station car parks, and thus overflow to suburban residential streets, then introducing paid train station parking would be disastrous for public transport and residents around train stations. Thankfully, there are currently no plans for implementing paid station parking in SE Queensland.
Posted by BrizCommuter at 10:09 PM 6 comments: 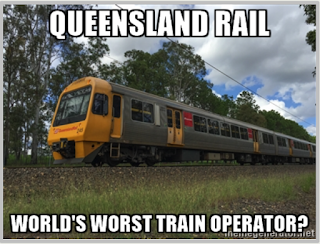 Brisbane Metro - Why Bus is Best

BrizCommuter was delighted when Brisbane City Council (BCC) recently announced plans to replace the original (ill thought out) rubber tyred train based Brisbane Metro, with the much more sensible high frequency bi-artic buses. The only major infrastructure change is the $1b under-grounding of the congested Cultural Centre busway station - this location being the achilles heel of the busway network. Unfortunately, this bus Metro plan has been ridiculed by some uninformed politicians (council opposition) and journalists.

In this blog post, BrizCommuter explains why bus is the best option for increasing the capacity of Brisbane's busway system. But first, what is a Metro? Metro is short for Metropolitan (or Metropolitan Railway), of which the first "Metro" ran in London in 1863. Metros are defined as being train lines where trains run frequently enough for the service to be truly turn up and go (at least every 10 minutes), and are completely grade separated from other traffic (cars, pedestrians, other train lines). However, in more recent years, the Metro term has been used to describe any high frequency public transport system (train, light rail, or bus), entire low frequency public transport systems (hello Hobart Metro), and of course mid-sized urban supermarkets (hello Woolworths Metro). Thus BCC are far from the first people to be charged with abuse of the term Metro, and knocking BCC for use of the term is somewhat petty.

So what are the advantages of using bi-artic buses (three section bendy buses) instead of the originally planned rubber-tyred metro trains?


Are there any reasons why train based Metro would have been better?
For many large cities rail/train based Metro is the best solution to transport issues, and this is one of the reasons why Cross River Rail (which will run metro like frequencies) is Queensland's most urgent infrastructure project. However, in the case of upgrading Brisbane's busway network, there are many compelling reasons why bus based metro (Bus Rapid Transit) is by far the best solution to serve Brisbane for the next few decades. Lord Mayor Graham Quirk, and Deputy Mayor Adrian Schrinner have made the sensible decision to switch from trains to buses for the Brisbane Metro.
Posted by BrizCommuter at 9:54 PM 3 comments:

Is Tim Nicholls Out of Touch?

BrizCommuter was recently delighted to see the LNP Brisbane City Council refining the Brisbane Metro design to something more sensible - Bus Rapid Transit. It was also good news, that Lord Mayor Graham Quirk, and Deputy Mayor Adrian Schrinner have been quoted as finally supporting Cross River Rail, which the Brisbane Metro will connect with and complement. The LNP Federal Government have also recently stated (whilst playing tit-for-tat politics) that Cross River Rail needed to have better integration between Brisbane Metro. Well now it does, both systems are looking a bit more likely. Even car lobby group RACQ is highly supportive of Cross River Rail, stating that it is Queensland's number one infrastructure project. So what are the views of LNP Leader of the Opposition Tim Nicholls MP?

Unfortunately, it seems that Tim hasn't quite got the memo that Brisbane and SE Queensland is well and truly screwed with coping with future population growth, if it doesn't build Cross River Rail. He has recently been quoted as saying:

Hey Tim, didn't, the LNP Newman Government (for which you were Newman's henchman), delay Cross River Rail by years, by scrapping it for the flawed BaT Tunnel design, for which sources have since been quoted as saying "would never happen"?

"The Metro solves a current infrastructure bottleneck while the cross river rail seeks to address a bottleneck that ‘may’ occur in 2026."

Hey Tim, maybe patronage would have been better if under the awful LNP Newman Government, the following hadn't occurred:

So Mr Nicholls - what are your policies?
Please tell us Tim? Anyone there?

Posted by BrizCommuter at 8:38 PM 4 comments:

BrizCommuter and Rail Back on Track have been very vocal in being against Brisbane City Council's ludicrous Brisbane Metro Subway System proposal, which was an ill-thought out election promise. In a pleasantly surprising move, Brisbane City Council have seen the light, and dumped the disruptive idea of converting the inner busway into a rubber-tyred metro system. Yes, Lord Mayor Graham Quirk, and Deputy Mayor Adrian Schrinner have finally seem some common sense! Before we move into the replacement plan for the Brisbane Metro - what was wrong with the original plan?

So what is in the far more sensible Brisbane Metro Mk2, which is now a Bus Rapid Transit (BRT) system.
Some of BrizCommuter's thoughts on this:
BrizCommuter is happily stunned that Brisbane politicians have finally made a sensible decision.
Posted by BrizCommuter at 6:47 AM 8 comments:

As most of the remaining rail users in Brisbane and SE Queensland will know, Friday is the "Day from Hell" when trying to get to and from work, school, university, appointments, and even getting pissed in the Valley. Due to Queensland Rail's (QR) lack of drivers, and drivers only being able to work 11 days on a row, Fridays have a further reduced timetable. This is different to the Monday to Thursday timetable. Even BrizCommuter, who is a self confessed "public transport expert", keeps getting caught out by the timetable changes on Friday. So what are the problems with QR's Friday timetable from hell?
Whilst the lack of driver issue is not going to be solved overnight (in fact, possibly not until 2019, due to QR still not hiring external applicants), BrizCommuter calls that the Friday services need to be same as Thursday services as soon as reasonably possible. In the mean time, there needs to be improved communications to passengers about the changes. Some passengers (who must be living under a rock) are still unaware that Friday has a different timetable, and many passengers are unaware of the changes that affect them.

Rail services on Fridays are an embarrassment for Brisbane, and resulting voter anger may well be end for the ALP Palaszczuk government, irrespective of the Newman and Emerson cause. Does any other developed city in the world run a "special cut-back" timetable Fridays? No!

The above service advisory from TransLink should read: The 4:50pm Ipswich to Kippa-Ring train is delayed 10 minutes due to inadequate train service caused by institutional incompetence.
Posted by BrizCommuter at 5:30 AM 4 comments: