During the 2016 Brisbane City Council election campaign, BrizCommuter has been waiting for at least one side of politics to announce another "CityGlider" bus route. Surprisingly, The Greens have beaten the other parties to it. The Greens have funnily enough called their planned CityGlider the Green CityGlider. It runs from Enoggera to Doomben, and also includes a cycle path along Kingsford Smith Drive instead of the LNP's unnecessary $650m widening.  A screenshot from The Greens website is below. 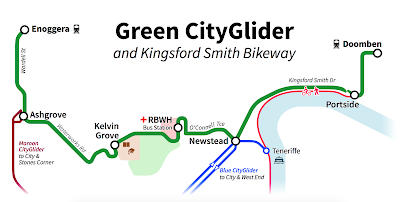 So what are the good points of the Green CityGlider?
What is not so good about the Green CityGlider?
Whilst BrizCommuter commends the The Greens for attempting a 'not via the CBD bus route', there is a chance it may end up like many other 'not via the CBD bus routes' and mainly be carrying air. Most commuters from these catchments would probably rather access the CBD. If it keeps its 'not via the CBD route', it may be advisable to have better interchange with rail at Bowen Hills, rather than with the Blue CityGlider in Newstead. The Eastern end should run the length of Northshore Hamilton instead of terminating at Doomben.

Without descending into "fantasy bus route" territory, at the Western End, existing high frequency bus routes could be re-arranged without adding new bus routes such as the Green CityGlider. The Maroon CityGlider duplicates the route 385 (The Gap Buz) throughout it's routing from the CBD to Bardon (via Given and Latrobe Terrace), but confusingly with some stops being in different places. It may be preferable to route the 385 completely via Waterworks Rd, and extend the Maroon CityGlider from Ashgrove to Enoggera. This would increase high frequency network coverage with no increase in bus routes. Commuters along Coopers Camp Road would however miss out.

As this is an idea from The Greens, it is highly unlikely it will see the light of day anyway. However, it seems to make more sense than the ALP and LNP's ridiculous plans to spend more than a billion $$$ on metros or trams.

Note: The Greens have also announced the Centenary Glider which would sensibly bring a high frequency bus route to Centenary Suburbs for the first time. Hopefully this would replace the confusing mix if infrequent bus routes that currently serve this large suburb.
Posted by BrizCommuter at 8:07 PM