Where is the QR Passenger Load Survey (Again)?

After the dark 3 years of the LNP Newman government, transport transparency has started to improve in SE Queensland under the Palaszczuk ALP government. The TransLink Tracker has made a re-appearance, and Queensland Rail (QR) have added "skipped stations" statistics. Probably due to real time data, even Brisbane bus statistics are now realistic at 16% of buses being late - previously the 'on time' bus figures were laughably in the high 90s%.

However, there is still one big thing missing. That is the QR Passenger Load survey. This has yet again gone missing in action for quite a few years. The QR Passenger Load survey looks at the peak boardings and alightings. It also looks at the rolling stock assignment (e.g. numbers of 3-car and 6-car units services) per line, and the percentage of services that are overcrowded per line. The non-publishing of this data smacks of a lack of transparency. It also means that public transport advocates, journalists, and the public have no idea of the overcrowding situation, and what needs to be done to improve the situation. BrizCommuter calls on both QR and TransLink to start publishing the survey again.

There are also other areas where a lack of transparency is notable with QR. 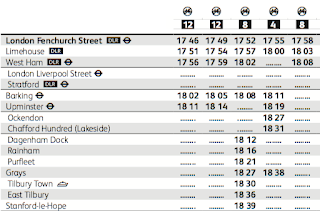 In London, even the Working Time Tables (WTT) for the tube lines are published. A WTT shows the detailed workings of each train service, including when trains enter and exit depots, out of service trains, whether the train crew step back, and timings down to quarter of a minute. Now BrizCommuter is not expecting QR to publish their WTT, however it shows the massive difference in transparency between Brisbane and London. Publishing the QR Passenger Load survey again would be step in the right direction!

Posted by BrizCommuter at 8:21 PM