Why do all trains now stop between Northgate and Bowen Hills? 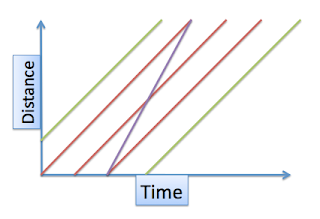 A question asked by many a Caboolture and Sunshine Coast Line user in the last week, is why do (nearly) all trains now stop at all stations between Northgate and Bowen Hills? The answer is pretty simple, and explained by a simplified "train graph" (right). In the am peak, the Caboolture Line now runs 18 trains per hour (tph), with trains usually spaced 3 minutes apart. Half of these trains start at Caboolture, and half at Petrie. As there are three tracks between Lawnton and Northgate, then the trains from Caboolture can run express and overtake the Petrie services. However, between Northgate and Bowen Hills (and to Roma Street), the Caboolture Line only has the use of two tracks (the mains), one in each direction. As the trains cannot overtake each other, they have to stop at all stations.

So what would happen if one of the Caboolture Line services ran express between Northgate and Bowen Hills. The "train graph" shows a 15 minute portion of the am peak, with 5 stopping services (green and red), all spaced 3 minutes apart. If you run an express service (purple) to run just 6 minutes faster than other services, it will eat up the track slots for 3 of the other services (red). This would decrease the overall number of train services by 40%, or 1500 passengers (assuming 750 passengers per train) just in this 15 minute period. It would reduce the number of trains serving all stations by 60%. It would also increase the gap between services at these stations by 300%. So as you can see, to make the most out of the available infrastructure, all service have to stop at all stations between Northgate and Bowen Hills. 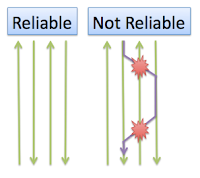 Are there any other options? There are four tracks between Northgate and the CBD, two of which (the suburban tracks) are not fully utilised until the Ferny Grove Lines joins North of Bowen Hills. Why can't expresses from Caboolture or the Sunshine Coast run on these tracks? Again the answer is fairly simple, and shown in another diagram (right). The train would have to switch between tracks, crossing the paths of other train services known as a conflicting move. The schedules for services on both tracks would have to allow for this conflicting move, and the trains would need to run exactly to schedule so as to not cause the conflicting services to also run late. So for reliability reasons, it makes perfect sense to segregate the train services on the mains from the train services on the suburbans.

Could Shorncliffe Line services serve all stations between Northgate and Bowen Hills, and allow all Caboolture and Sunshine Coast services to run express between Northgate and Bowen Hills? At the moment, no, as there are only approx. 3tph of am peak Shorncliffe services which would not be able to cope with the numbers of passengers from Nundah, Toombul, Eagle Junction, Wooloowin, and Albion. What about after the phase two timetables in 2012? This all depends of how many trains can be run on the suburban tracks through the CBD. If the limit is 20tph, then it is likely that the timetables will repeat every 15 minutes, with 8tph from Ferny Grove, and 4tph from Airport. This leaves just 8tph to be split between the Doomben and Shorncliffe Lines. Everytime a Doomben Line train runs, this will leave a 15 minute service gap between Northgate and Eagle Junction. This may be too long a gap to prevent the next service from Shorncliffe becoming overcrowded. There is also the question as to whether the Shorncliffe Line could handle approximately 6tph anyway due to the single track section, unless some trains can reverse at Sandgate (or another location) instead? Also, Nundah, Toombul, Wooloowin, and Albion commuters would not appreciate a massive reduction in train services from 18tph to 6-8tph. So unless more than 20tph can be run along the suburban tracks, or QR's schedulers can think of a more clever service pattern on the suburbans (maybe 9/18 minute cycles?), then it is not looking good for the expressing of Caboolture and Sunshine Coast trains between Northgate and Bowen Hills until after Cross River Rail is opened.
Posted by BrizCommuter at 5:40 PM