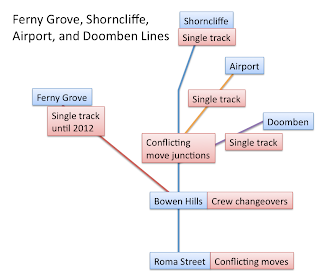 Once a few issues have been sorted out with the recently introduced phase 1 timetable changes, hopefully QR/TransLink's schedulers will move onto planning the phase 2 timetables. These are now due for draft release in late 2011, with introduction into service sometime in 2012. These phase two timetables will be for the Ferny Grove, Shorncliffe, Airport, Doomben, Cleveland, Beenleigh, and Gold Coast Lines which all share the suburban tracks through the CBD. Here is the first of a two part blog post, with BrizCommuter's speculation of what we may see in these timetables changes. Part 1 is covering the lines from the North - Ferny Grove, Shorncliffe, Airport, and Doomben Lines.

Lets start with the current off-peak timetables - which at every 30 mins is poor compared with both Australian and international benchmarks. With 15% yearly fare increases making Brisbane one of the most expensive places in the world to use public transport, commuters expect nothing other than the belated introduction of the 15 minute "intermediate off-peak pattern" in 2012. According to the Inner City Rail Capacity Study (2008), this was expected to be introduced in 2010, and would give the Ferny Grove Line, inner Beenleigh and inner Cleveland Lines a 15 minute off-peak service. Airtrain, the "world's worst airport train service" also urgently needs to have its 15 minute off-peak frequency re-introduced.  Failure to introduce 15 minute off-peak services in 2012, would result in a huge backlash from public transport lobbyists, just before an election!

Peak service improvements will have to fit around multiple infrastructure limitations. These include single track sections between Sandgate to Shorncliffe, Eagle Junction to International Airport, and Eagle Junction to Doomben. It is assumed that the phase two timetables will now be introduced after the opening of Keperra to Ferny Grove duplication, which should solve a lot of scheduling headaches. Further scheduling limitations will be caused by the requirements for Roma Street starting/terminating trains to cross the path of all other passenger train services, as well as junction conflicts at Eagle Junction and Airport Junction. Trains that travel beyond Roma Street will have to fit in with infrastructure limitations on the Cleveland, Beenleigh, and Gold Coast Lines which will be explained in part 2 of this blog post. As at present, line pairings may have to be thrown out of the window during the peaks. Of course, this may mean that the 16km Ferny Grove Line may end up with some trains with toilets.

According to the Inner City Rail capacity study, the suburban tracks can handle up to 23tph - 5 trains every 13 mins. BrizCommuter doubts that this is realistically possible from the North, and has assumed a timetable based around 3 min track slots - 5 trains every 15 minutes.  Into this it would be possible to run 8tph from Ferny Grove. These should be an all stations "metro style" service running every 6 to 9 minutes. There would be no need for Mitchelton starting/terminating trains, or expresses on the Ferny Grove line after the duplication to Ferny Grove has been completed. The counter peak direction service to Ferny Grove should be 4tph/15 min frequency. 4tph/15 min frequency should be run to/from Airport, which would probably still have to run express between Eagle Junction and Bowen Hills to keep Airtrain happy. 4tph/15 min frequency is probably the maximum even peak frequency that can be run to/from Shorncliffe using the existing infrastructure, and there may need to be some signalling modifications at Sandgate for this to occur. This Shorncliffe Line frequency would mean that Caboolture and Sunshine Coast services would still need to serve all stations between Northgate and Bowen Hills. Finally assuming the Doomben Line doesn't get "Tennysoned", it would get a 2tph/30 minute frequency service. Infrastructure constraints would make 4tph very difficult to achieve on this line. Sadly, this will still mean that only the desperate and car-less would use the Doomben Line.

This would result in a total 18tph am peak service on the suburban tracks from the North, a 20% increase compared to the present 15tph. Of course, the real timetables may be very different!

Part two of this blog post will look at the suburban lines from the South - Cleveland, Beenleigh, and Gold Coast Lines.
Posted by BrizCommuter at 7:51 PM