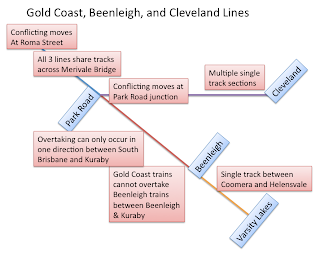 The phase 2 timetables for the lines from the South - Cleveland, Beenleigh, and Gold Coast, may be somewhat more complex for QR/TransLink's schedulers. This time, we will start with peak service issues. There are many infrastructure constraints, including multiple single track sections on the Cleveland Line, and the single track between Coomera and Helensvale. Two tracks between Beenleigh and Kuraby prevent Gold Coast Line trains overtaking Beenleigh Line trains on this section in both directions. Three tracks between Kuraby and South Brisbane prevent Gold Coast Line trains overtaking Beenleigh Line trains in the counter peak direction or in one direction off-peak. The unusable 4th platform at Park Road, conflicting moves at Park Road junction, conflicting moves at Roma Street, and crew changeovers at Bowen Hills also add to the schedulers headache.

Currently during the am peak, just under 20tph cross the Merivale Bridge between South Brisbane and Roma Street. Of these approx. 4tph originate from the Gold Coast, approx. 8tph are from the Beenleigh Line (some of which previously used the Tennyson Line and now start at Yeerongpilly), and approx. 8tph from the Cleveland Line. Aside from the Gold Coast and outer Beenleigh Lines, the service patterns are somewhat random. Another problem is that many Cleveland and Beenleigh Line trains are overcrowded by the time they reach South Bank, but to limit passengers standing for long periods, the Gold Coast Line trains are little over half-full. More use needs to be made out of this spare capacity as trains approach the CBD, but with the Gold Coast Line patronage rising, more peak Gold Coast Line services may be required further adding to the spare capacity. The only solutions to this are to either increase the number of standing passengers on the Gold Coast Line services, or increase the number of Gold Coast services, but take on more passengers nearer to the CBD (e.g stopping at all stations between Yeerongpilly and Park Road). Both of these suggestions will be unpopular with Gold Coast Line passengers, possibly apart from those trying to get to UQ or the PA Hospital. The single track section between Helensvale and Coomera will restrict some peak frequency increases for the Gold Coast Line, as counter peak direction trains also have to be allowed to traverse this section approximately every 30mins.

The Cleveland Line has many single track sections (of varying section running times) between Manly and Cleveland, which limits the number of services which can be run to and from Cleveland. BrizCommuter suggests alternating expresses from Cleveland, and all stations services from Lota/Manly.  Due to the bias of passengers on the inner section of the line, the expresses should additionally call at some stations between Manly and Park Road such as Morningside (busiest station on line) or Buranda (near to SE Busway and PA Hospital). Trains should be scheduled so as to avoid peak service gaps of more than 15 mins at all stations.

The Beenleigh Line would require approx. half of it's services to start at Kuraby, so as to not get in the way of Gold Coast Line express services. Whether there are requirements for the Beenleigh starters to run express for part of the line may depend upon expected loadings. Again, peak service gaps of more than 15 mins at any station should be avoided. With the extinction of Tennyson Line services which now start at Yeerongpilly, there should be a few track slots available for extra Beenleigh or Gold Coast Line services.

The services from all 3 lines then have to fit happily together like a jigsaw at various points between Yeerongpilly and South Brisbane before crossing the Merivale Bridge. Depending on which source you believe, the tracks across the Merivale Bridge can handle either 20tph, 23tph, or 25tph. At 20tph, the lines would probably have a similar service provision to the current timetables - e.g approx. 1 Gold Coast, 2 Beenleigh Line, and 2 Cleveland Line services every 15 minutes. However the advantages of a complete timetable re-write and extinction of Tennyson Line services may allow for more efficient use of these track slots to reduce overcrowding. At 23tph, services could be increased slightly with 1 Gold Coast Line, 2 Beenleigh Line, and 2 Cleveland Line services every 13 minutes. But can the Cleveland Line's single track sections cope with trains every 13 minutes? BrizCommuter doubts that frequencies higher than 23tph across the Merivale Bridge are realistically possible. These above mentioned service patterns are regular, but there are lots of possibilities using either less regular service patterns, or radical changes to the current stopping patterns that haven't been looked at in this blog post. BrizCommuter recommends that QR/TransLink's schedulers take some strong headache tablets before writing the peak timetables for these lines! BrizCommuter also suggests that there need to be more early am peak services, as service provision for those arriving in the CBD around 7:30am is often underestimated, and attracting passengers to earlier services may help move some passengers from later services.

As for off-peak services, the recent extortionate fare rises mean that public transport users expect the belated 15 minute "intermediate off-peak" service patterns between the CBD to Kuraby, and CBD to Manly to be introduced in 2012. Unfortunately due to half-baked infrastructure projects on the Beenleigh Line, Gold Coast Line trains would have to be slowed down by approx 4 minutes to allow 15 minutes off-peak to Kuraby. Maybe off-peak Gold Coast trains should also stop all stations between Yeerongilly and Park Road? The Rail Service and Infrastructure Requirements Study (2007) also mentioned a 15 minute off-peak service as far as Robina, but this was dropped by the Inner City Rail Capacity Study (2008), so don't hold your breath for 15 minute off-peak services to the Gold Coast.

To conclude, with limited track capacity across the Merivale Bridge, and many infrastructure constraints (thanks to the Queensland Government's lack of spending), the phase 2 timetables for the Beenleigh, Gold Coast, and Cleveland Lines will be rather interesting. It is likely that as with the phase 1 timetables (i.e. slowing down of Caboolture Line services) that some scheduling compromises will need to be made which will be unpopular with some commuters.
Posted by BrizCommuter at 3:28 PM