As previously rumoured, failed SE Queensland rail operator Queensland Rail (QR) have sunk to a new low in customer service. Whilst the news is currently saturated with the post Cyclone Debbie natural disaster, the Deputy Premier and Minister for Transport Jackie Trad conveniently announced that Easter train services, and also the weekend before Easter (8-9th April), will only run hourly. Trains services will only run every 2 hours on the Sunshine Coast Line. Only the Airport Line will still run the usual 30 minute service. The train times will also be at a different time to the normal clock face times, which will frustrate passengers with even longer waits and missed bus/train connections.

The spin is that this will make Easter services more reliable, though QR appear to run an unreliable service irrespective of frequency. This horrendous service reduction will take QR back to era of diesel hauled services in the late 70s, early 80s. BrizCommuter is very disappointed that Neil Scales (A/CEO of QR, and D-G of Department of Transport and Main Roads) saying that the "2017 timetable would be in place for the whole of 2017" turned out to be a lie.

Quite clearly, QR do not care the slightest bit about the travelling public including those who need to travel over Easter and the weekend prior, including:

BrizCommuter has just cancelled a restaurant reservation in Brisbane's CBD on Easter Saturday, as he can't face up to a 59 minute wait for a train home. BrizCommuter's work colleagues will struggle to get to work by train, and will have to add to road congestion on the Pacific and Bruce Highways instead. Also, at the time of writing, TransLink have failed to publish any .pdf timetables. Lets hope QR make more of an effort at informing customers about the Easter changes than the previous #RailFail changes.

QR's worsening #RailFail begs quite a few questions:
Just when commuters didn't think #RailFail could get any worse, it does. Public transport operation, and governance need a complete overhaul in Brisbane. With utter contempt for public transport users, the ALP Palaszczuk government appears to be handing the next election on a plate to the LNP.

Meanwhile in Western Australia, which will be running trains every 15 minutes, there is an increase in long distance public transport services for Easter... 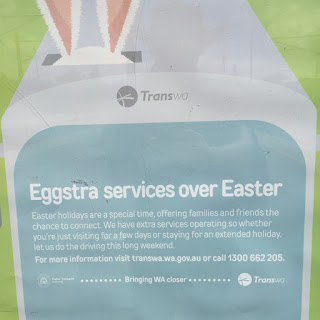 Posted by BrizCommuter at 4:06 PM