As predicted by BrizCommuter last November, it is looking like Queensland Rail's (QR) Rail Fail is going to seriously impact SE Queensland commuters during the Commonwealth Games, being held on the Gold Coast between the 4th and 15th of April 2018.

The Courier Mail recently ran an article on this subject, based on concern from Rail Back on Track, which included this quote:
" ... Asked about the risk of another rail fail debacle from extra stress on the network during the event, Commonwealth Games Minister Kate Jones yesterday said: “We are very confident that both TransLink and the Director-General of Transport and Main Roads [Neil Scales] have given their assurance that we can deliver the additional capacity.”
BrizCommuter is very concerned that Commonwealth Games Minister Kate Jones is being kept in the dark about the impending Commonwealth Games Rail Fail, just as ex-Transport Minister Stirling Hinchliffe was kept in the dark about Rail Fail. Kate, you might want to read the below blog post... 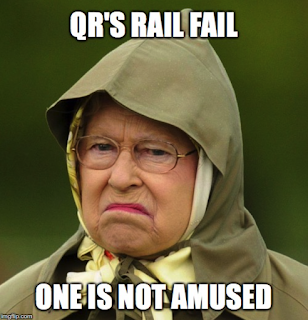 It has already been stated by the Strachan Inquiry that there will be insufficient train crew to run the full "October 2016" timetable until late 2018 with overtime, and mid/late 2019 without overtime. These dates are after the Commonwealth Games. As there are plans for increasing train services on the Gold Coast Line during the Commonwealth Games to 8 train per hour (tph) (from the current 2tph off-peak), then it is pretty obvious that train services will need to be reduced on QR's other train lines due to lack of drivers. The delay to New Generation Rollingstock (NGR) trains will also not help the situation, though the lack of driver issue seems to be far more pressing.

Unfortunately, at this stage it is unknown how bad these service cuts are going to be. Since the start of #RailFail, QR and TransLink have provided inadequate timetables, the worst of which have been:

Based on recent experience of QR and TransLink's complete disregard for customers, the cut timetables may only be announced a few weeks before the Commonwealth Games, with many commuters being completely unaware of the changes until their usual train fails to appear. What service cuts might be expected during the Commonwealth Games?

Of course, this is in stark contrast to the highly successful London 2012 Olympics where train service frequency (typically 24tph), and operating hours were increased on all Tube lines during the event.

Lack of drivers and trains is not the only issue for the 2018 Commonwealth Games train services. On QR's project page for the Coomera to Helensvale duplication, it is mentioned that the Gold Coast Line will run 8tph in both directions during the Games. That is a train on average every 7.5 minutes in each direction.

To operate the above mentioned bi-directional 8tph service runs into a few issues due to lacking track infrastructure on the Gold Coast/Beenleigh Line corridor. Due to a half-baked infrastructure projects during the Beattie/Bligh era, there are only 3 tracks between Park Road and Kuraby (when there should have been 4), and only 2 tracks between Kuraby and Varsity Lakes (with a 3rd track at Bethania). This allows an 8tph service in one direction with express Gold Coast trains able to overtake slower all stations/stopping Beenleigh Line trains. But in the opposite direction, the Gold Coast trains are unable to overtake the Beenleigh Line trains as they have to share the same track.

As trains are unable to leapfrog each other, this is likely to be causing a major headache for QR's schedulers. BrizCommuter doubts that the claimed bi-directional 8tph services will be possible, without either slowing down Gold Coast train services, or severely limiting services calling at Beenleigh Line stations. Just to exacerbate the issue, the normal peak service direction will be the opposite to the Commonwealth Games peak traffic direction. Thus QR will have to choose between either slowing down regular commuters trying to get to/from work in Brisbane, or slowing down passengers trying to get to/from the Commonwealth Games on the Gold Coast.

Due to the serious NGR project failure, it is likely that very few NGR trains will be in service by April 2018. Thus QR will still be relying on their geriatric EMU fleet of trains. There seems to be a noticeable decrease in EMU reliability recently. A broken down EMU train blocking the path of trains trying to get to/from the Gold Coast could be disastrous during the Commonwealth Games. Also, a broken down train on other lines will make the reduced train service frequency even worse.

It looks like the policy failures of three successive Queensland state governments, combined with institutional incompetence in QR, is going to make SE Queensland look even more backwards on the world stage (well, ex-British Empire stage) during the 2018 Gold Coast Commonwealth Games. This impending issue is already starting to attract the international press. Rail Fail may make getting stuck in traffic on the M1 the more attractive option for getting around SE Queensland during the Games.

The Courier Mail have reported that Commonwealth Games chiefs in London had written to the "Palaszczuk Government warning the event was at “significant risk” due to the magnitude of transport planning problems faced". This of course, no surprise to many BrizCommuter readers who can quite clearly see that decades of continuing 1960s road-centric transport policy in SE Queensland has placed the urban conurbation into a transport nightmare. This is confounded when you have to efficiently move hundreds of thousands of event goers. Will this be a wake up call that Brisbane is far behind other Oceana cities when it comes to public transport? Or will SE Queensland's politicians just continue with their spin and denial?
Posted by BrizCommuter at 11:45 AM