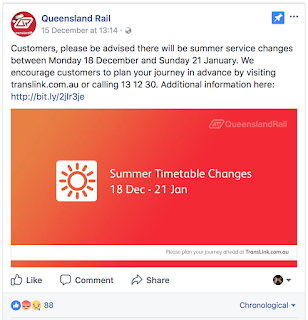 It was inevitable that the second annual Queensland Rail (QR) Summer School Holiday Interim Timetable (SHIT), which neglects important requirements such as getting commuters to work, was going to result in a major backlash from commuters. Before the comments get deleted, here is a sample of feedback on QR's Facebook page.

So I guess we’re NOT catering for the working community...you know, the ones who have a clear start/finish time, from early January, that starts at or before sunrise and finish mid-late afternoon?

About time QR get competition in the market!

Sorry Queensland Rail, but this is a failure of management yet again. You make a big song and dance about the new trains on Monday improving the network and then at the same time you cut back services over the Christmas period. How does that improve things? Ultimately, this is not about "effectively deploying our available resources to where they’re needed most to meet demand" to quote you above, it is simply about not falling in a big heap due to not managing your train crews leave properly. As one who works over the Christmas and New Year period, these timetable changes are ludicrous for a first world public transport network. A lot of us still have to come to work, and we all suffer because of it. When will you stop inconveniencing your customers and provide us with a continuous year round regular service rather than the Friday farce and Christmas/New Year slowdown that you force us to endure.

Wow. Hourly services. Too bad if you miss one. Some people still work. The world doesn't stop because christmas is coming.

This is ridiculous, the trains are bad enough tring to get to and from Cleveland to the city. No express trains in the afternoons after 5pm. Who finishes work before 5pm to get the express train, not office people, then there's the usual Friday afternoon battle, standing room only with everyone squashing on the 1 train you have after 5pm and not even an express. Now you cut services for those still working over Christmas. Seems you only cater for school kids, not the workers who are the ones who actually pay your wages. Very sad Qld rail.

This timetable is really inconvenient, it's bad enough having to get to work for 6am as it is, but now you've taken out the train I catch so I'll have to catch an even earlier one to be there on time... too bad I can't just take a holiday over that period! People still have to go to work, surely most people catching the train around that time are doing just that, why change it.

Might have been worth announcing this news all week last week on the trains.... but I can’t seem to understand why you think if schools are on holidays the rest of the populations goes on holidays.... Frustrated!!!

Well done QR with the ridiculous Summer timetable, the trains are more packed and unbearable than ever!

I have never been to your Facebook page before. So unlucky for me did not know about summer timetable. No signs or messages on the platforms. What a service that we have the pleasure of paying for. No summer time rates....

Packed trains all round today. Unable to stand let alone sit. Jesus QR, do you really think no one comes into the city on the last week before Christmas? City is packed with Xmas shoppers and working folk who still have their nose to the grind, and yet you cut services across the board. Another really poor management decision

People want to spend extra time with heir families over the Christmas period, not extra time sitting on a train

I can’t believe this awful timetable is going to run until the 21ST OF JANUARY!! Surely you know the majority of people will be back at work within the first week or so of January!! And can I just predicted now that you will slyly cut a couple of services along the way when the Summer Timetable finishes!

Hi QR, I have noticed that ALL afternoon outbound CBD express services on the Ipswich line have been changed to all stations. This will impact many, many people and cause a lot of inconvenience to those that have time restraints. I cannot just leave my work early to compensate for the extra delay in getting home and I do not have the additional dollars to fork out to my daycare provider for every minute I am late to collect my son. This isn’t good enough QR, can you please reinstate the express services, it seems absurd that cutting these services would even be considered, let alone approved

Thanks ever so much for making my working day just that little bit longer and a little more frustrating to get home to Ipswich from Central by stopping at every station. Really appreciate it guys.

So QR why do you always do this? Most people don't stop working over school holidays and are still required to get to and from work -only now it takes twice as long because you've adjusted your timetables to have less trains and express services. Merry Christmas - this year QR gives you less time with your family!

Who was the genius who moved the 5.03pm Redcliffe train to 5.12pm, and has the Nambour now leaving before it at 5.09pm. Everyone who wants to get to Petrie to then get to Redcliffe, and the people who want to get to Caboolture, are all now getting the one train. Yesterday I could hardly get into the train as it was so full. People had trouble getting off at their station we were packed in that tight. Where is your duty of care? if there was a FIRE we would be dead, this has to be illegal! It's down right dangerous and unacceptable, but yet again we're just cattle that don't count. If the politicians had to use this miserable service then I bet it would be changed. What an embarrassment!!!

Brisbane- “new world city” but no express trains to get you home for an entire month.

This is so disappointing, the bus timetable at redbank hasn't changed to coordinate with the train delay. My husband will be leaving home at 5.50 am and getting home at 6.40pm that extra 20 mins at each end is cutting into the few precious minutes he sees his kids each day. I am so disappointed

Why not start from 22/12?? In any normal workplace in the city offices are still open and all staff work hence why EVERY TRAIN is crammed to the max!!

Hard to plan a journey when you have made sure that none of your Ipswich services make it in time for bus transfers any more! Absolutely disgusting service QR. If you don’t have enough train drivers to meet demand, hire & train more, considering the outrageous prices you charge you should have plenty to accomplish this.

Love the new "summer service"..... its like someone at QLD rail thinks everyone goes on holiday

Cant even get a seat on my train anymore and thats all the way at Petrie, so every other stop after that is just crowding the train.
Now at central waiting forever for a train like this is a 3rd world country, i just want to get home to my family, instead sitting here waiting for my train on a super crowded platform. We don't even get a fare reduction to make up for this lack of service!!!! At least keep the trains running at their normal timetable right up until xmas and have 2 weeks of "summer service" before returning back to normal.

Thanks for letting us know?! What happened to communication? No mention at central station last week no mention on the trains no flyers in mailboxes on Sunshine Coast (heard Redcliffe got them) no signage at train stations nothing. Found out Monday morning when train didn't turn up normal time (after I rushed to catch train too) - and thanks for making me late to work. Appalling service and communication of changes not happy traveller at all. By the way no decrease of passengers on Sunshine Coast line trains are full, people are still working right up to Christmas.

I have to commute from Caboolture to Park Road daily. I don’t understand making these changes to peak hour timetables I got to the station early to attempt to get to work early but got to central and just missed the connecting train then have to wait a whole 13 minutes for the next train!! It sucks I can’t get to where I want to go in the timeframe I want to be there. If you change this timetable perhaps you should change the charges, summer timetable summer charges accordingly seeing the services are cut. Not great QR you make it very difficult for the people that have to work right up to Xmas!!!

My timetable has completely changed. None of my connections work anymore. Trains are crowded. Some of us are still working in December and January.

If you think this is bad, just wait until the Commonwealth Games!
Posted by BrizCommuter at 9:49 AM