Two years after long suffering QR passengers had been informed the New Generation Rollingstock (NGR) trains would enter service, they finally entered service. BrizCommuter took a ride on part of the inaugural NGR service from Varsity Lakes to Brisbane Airport. 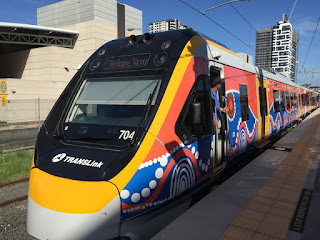 First impressions are that the Bombardier built NGR trains have some great features. These include destination displays on the outside of the train, half-decent handholds for standing passengers, touch responsive lights on the push buttons, high seat backs, lots of internal CCTV, external cameras for drivers only operation (sorry, Campbell) guards, and a quiet ride. In fact, the trains are generally looking good until you get the toilet. 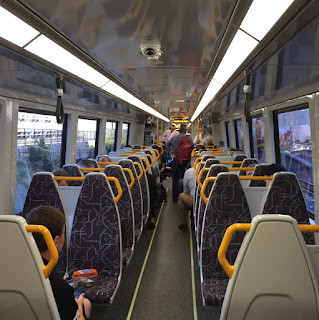 The toilets are where the NGR's fall flat on face. The single toilet (as the moment) has been placed in the middle of the train, at the medial end of the 3rd or 4th carriage depending on the direction of the train (due to track layouts on the QR network trains can be either way around). The corridor past the toilet is too narrow for a wheelchair, mobility scooters, double prams, or even people on crutches. Thus you can only access the disabled toilet from the half of the train in which the toilet is located. Just to add to the misery for disabled passengers, there is insufficient space in between the toilet bowl and the wall, not helped by a curving door. In fact, the toilets are not legally compliant, according to the Disability Discrimination Act. To allow the trains to enter service, QR (or possibly Department of Transport and Main Roads who have badly managed the NGR project) have had to request an exemption from AHRC to enter the trains into passenger service until they sort out the mess. At this point in time, this exemption hasn't been provided (and is unlikely to be until at least February 2018), thus it is technically illegal for the NGR trains to have been entered into service, with risk of litigation. 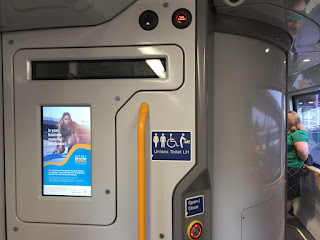 To sort out this discrimination against the disabled, the NGR trains will be reconfigured. The result of this, is that less than half of the NGR rains will have a toilet instead of all trains as originally promised. This means that commuters on hour long suburban journeys (e.g. between Beenleigh, Cleveland, Kippa-Ring, and Caboolture to Brisbane) will have to hold their bladders for the next three decades. This is totally unacceptable, and discourages public transport use.

Why weren't the toilets located next to the drivers cabs? Well this would have been sensible from a design point of view as it would have allowed for more space. Unfortunately due to having multiple half-arsed QR station upgrades where only the centre of the platform has been raised, the wheelchair access point is still in the middle of the train, despite the guard being at the back. Ooops!

The mismatch in position between the wheelchair access in the middle of the train, and the guard at the back will also massively increase staffing costs, as all stations served by NGR trains will have to be manned throughout operating hours. There may also be extra customer assistance staff on-boarding, bringing an NGR train up to Boeing 737 staffing levels. Who knows what the extra wage bill will be when NGRs are running throughout the network?

BrizCommuter feels sorry for QR, who are having to deal with major design faults caused by poor project management by TMR (the design was signed off under the Newman government). They are in a no win situation - keep the NGR trains out of service to comply with the law, or face increased unreliability from the ageing NGR trains and lack of time to troubleshoot the NGRs in service before the Commonwealth Games. There is no question that there should be a Commission of Inquiry into the epic botch that is the NGR project.
Posted by BrizCommuter at 6:44 PM