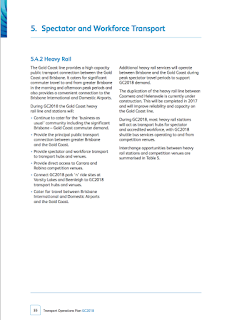 The Queensland Government recently published the Transport Management Plan for the Gold Coast 2018 Commonwealth Games. BrizCommuter was hoping this would address the following concerns about Heavy Rail Public Transport:

So how much of these rather important points were in the GC2018 Transport Management Plan? Nil, nothing, nada. Despite road based transport being given its own chapter, Heavy Rail has been given a single page, which is completely lacking in detail, and fails to mention the issues with lack of drivers and train. It seems that the Palaszczuk Government, and Minister for Education and Minister for Tourism, Major Events and the Commonwealth Games Kate Jones seem to be continuing to brush Rail Fail under the carpet hoping no-one will notice.


With there being minimal public transport legacy from the 2018 Commonwealth Games, and transport mainly based around park and ride, it looks like Queensland will be holding the least sustainable Commonwealth Games in terms of transport policy for decades. Expect the M1 to be chaos!

The GC2018 Transport Management Plan is downloadable from here:
http://public.intelligencebank.com/03e845b388c040f7c5ddb4db8707e73d/pubwewWdC.html
Posted by BrizCommuter at 6:03 PM