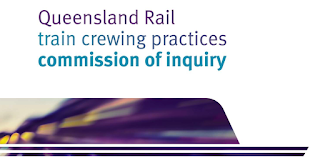 The Redcliffe Peninsula Line opened on 04/10/2016, with resulting rail chaos in subsequent days, including up to 167 services cancelled on 21/10/2016 due to lack of train crew (and to a lesser extent, lack of trains). This was followed by axed services in the Interim Timetables, even more axed services in the Interim Timetables Mk2, the Christmas Day cancellation-fest, up to 60% of peak services cut in the Summer School Holiday Timetables, and return of the Interim Timetables Mk2 for the whole of 2017. Commuters have been badly hit by these service cuts resulting in extended waits for trains, overcrowded trains, poor system reliability, and abysmal customer information.
A Commission of Inquiry was established by the ALP Palaszczuk government to investigate the circumstances leading up to and associated with the disruptions to the Citytrain timetable, and to assess and report on Queensland Rail’s (QR) recovery plan. The inquiry is titled "An Inquiry into Queensland Rail’s train crewing practices". Mr Phillip Strachan was appointed as Commissioner and provided a report, which has just been released. The report and government's response is accessible from the below website, and is worth reading in full (possibly before reading the rest of this blog post).
https://www.strachaninquiry.qld.gov.au

The report is not written as to blame particular government's, however the causes of Rail Fail are outlined below:

The report's 36 recommendations are outlined in brief below, with commentary in italics:

So what does the future hold for long suffering SE Queensland and Brisbane commuters?

And finally:
Sadly, it now looks like public transport in Brisbane will continue to be embarrassingly poor until at least the next decade.
Posted by BrizCommuter at 8:11 PM