QLD - The State of Fail 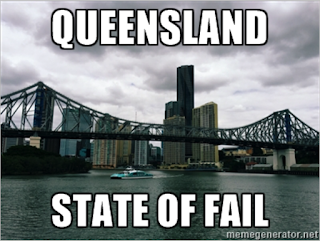 Further bad news for SE Queensland and Brisbane commuters today. It has been reported in the Courier Mail that:

"The Federal Government has warned that Cross River Rail does not properly integrate with the rest of Brisbane’s transport network, in a blow to the Palaszczuk State Government’s top-priority project. Urban Infrastructure Minister Paul Fletcher has insisted that “more work” is required on plans for the $5.5 billion inner-Brisbane rail link to ­ensure a better long-term solution for commuters."

Unfortunately, this just stinks of ongoing tit-for-tat politics that is making Brisbane look even more backwards compared to other developed cities. Cross River Rail Mk3 (CRR), has interchanges at Roma Street, Park Rd/Boggo Rd, and Wooloongabba for connections with busways and bus services. It connects with other train lines at Park Rd, and Roma Street. Track interfaces at each end, could however be better, but this doesn't seem to be the reason for this decision. BrizCommuter is somewhat confused as to how the Federal Government could come to this conclusion about integration, unless the LNP Federal Government are purposefully trying to stall CRR yet again?

It should be remembered that the LNP Newman State Government's flawed BaT tunnel plan missed out the crucial interchange at Park Rd/Boggo Rd. Would the LNP Federal Government have accepted that? Also, the ludicrous Brisbane Metro, a thought bubble of the LNP Brisbane City Council, is simply a case of turning part of the busway into a low capacity metro, forcing tens of thousands of passengers to have to change to travel into the CBD. Is that integrated enough for the LNP Federal Government? So what is the LNP Federal Government's agenda? It certainly isn't trying to improve travel for Brisbane commuters, not is it trying to make Brisbane a more attractive place for business to move to, or expand. Brisbane is only set to fall further down the list of "most liveable city" rankings.

Embarrassingly for Brisbane and SE Queensland, is that rival cities - Sydney, Melbourne, and Auckland all have new rail tunnels under construction. Auckland is recently managed bus network reform with minimal fuss.

Other recent failures related to Brisbane's public transport, as a result of political stupidity from both sides of politics are - with responsible political party denoted:

With no competent politicians on the horizon, it seems that Brisbane is well and truly screwed when it comes to face the transport challenges of the 21st century.
Posted by BrizCommuter at 12:37 PM