Redcliffe Peninsula Line - What No Expresses?

I want an express from my stationitis
1. Affliction in which commuters think that they should have a frequent express train service from their nearest station to home, to their nearest station for work.
2. Absolutely no regard for the fact that other people with different journeys also need to get to work.
3. Involves a lack of knowledge of how railways actually work.

The Redcliffe Peninsula Line train services are an extension of the previous Petrie all stations services. The Caboolture Line, which it shares some tracks with, runs express from Petrie to Northgate saving 9 minutes. Both lines run express from Northgate to Bowen Hills (calling at Eagle Junction). saving around 5 minutes. 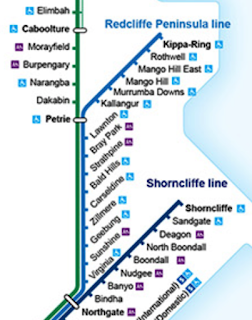 Lets look at the constraints and of requirements of the Caboolture, Sunshine Coast, and Redcliffe Peninsula Line services (Sector 1):


So if some Redcliffe Peninsula Line passengers want an express service what are the alternative options?
Realistically, there is no "golden bullet" solution, and it is unlikely that there will be any significant changes to the timetable, other than more 6-car trains, and increases in frequency from every 12 to 6 minutes during the am shoulder peak, and pm peak periods. ETCS signalling, plus more trains and train crew, may allow for a 20% increase in frequency.

Significant improvements in the am peak will only be possible when Cross River Rail is eventually opened. Even then, due to track constraints, the service improvements may not make up the patronage increases over time. The Trouts Road Line from Brisbane CBD to Strathpine would allow for a 100% increase in service frequency on both the Caboolture, Sunshine Coast, and Redcliffe Peninsula Lines, but is not even a pipe dream.

At the end of the day, the best way to get to work faster, is to live closer to your place of work!

Posted by BrizCommuter at 9:41 PM