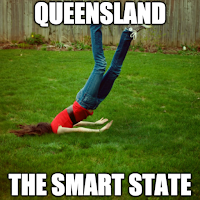 As predicted by BrizCommuter only a few weeks ago, the Moreton Bay Rail Link (MBRL) is indeed in serious trouble, and has now been delayed indefinitely. This of course means that commuters from the Redcliffe and North Lakes area will be without train services until possibly next year.  The new improved bus services to these suburbs will also be delayed, and the improved faster timetables for the Sunshine Coast and Caboolture Lines may also be delayed.

So what might have caused this horrendous stuff up? Well it seems that the Ansaldo MAcrolok signalling system as installed is unable to handle the required number of signals and train operations for safe operation of Moreton Bay Rail Link around the Petrie area. There are also reports of issues with the new signalling communicating with the existing systems in place. The ALP Palaszczuk government has thus sensibly delayed to opening due to safety reasons on the advice of Queensland Rail (QR), and an independent audit will be conducted into what has caused the delay. Interestingly the previous generation of signalling from Ansaldo known as Microlok is used successfully elsewhere on QR's network.

Not surprisingly, the finger is already being pointed at the destructive and arrogant Newman LNP government that was voted out in 2015. Despite QR having been involved in numerous successful (i.e. on time and under budget) rail projects with Trackstar Alliance, they were not allowed to tender for the construction of Moreton Bay Rail Link. This may have been part of Newman's plan to ultimately privatise QR's passenger services. Questions will be asked as to whether the $159m savings on the MBRL project by the Newman government, so gleefully announced by then transport minister Scott Emerson, resulted in the installation of a signalling system that was not type approved, and appears to be not fit for purpose.

Even if the blame lies with the ousted Newman government, BrizCommuter is concerned that it has taken so long for a formal announcement on the MBRL project's delay by the Palaszczuk government when most rail insiders have known there have been serious issues for months.

On the good side, the delay to MBRL slightly increases the chances of there actually being enough trains to run the MBRL train services, as the Next Generation Rollingstock project also seems to be yet another severely troubled and delayed project.

Only in Queensland - the utterly dumb state!

Going by the news today, it looks like there was some dodgy LNP lobbying going on behind the scenes that may have resulted in the contract with Ansaldo STS. BrizCommuter hopes that the investigation doesn't leave any stones unturned, and that those who are found responsible get more than a slap on the wrist.
Posted by BrizCommuter at 8:05 PM