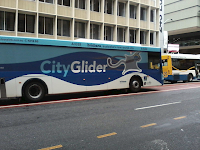 The statement claims to look at the following areas - commentary by BrizCommuter provided for each point:


TransLink have been given 6 months for this review. With SE Queensland's bus network being such a mess, BrizCommuter doubts that 6 months is enough to even scratch the surface. Will this review just be a quick fix to save money for the new LNP government, rather than the massive overhaul of Brisbane's bus network that is urgently required? As a final note, if any low patronage routes are to have services cut, then there needs to be adequate community consultation first.

Slasher Newman has now slashed TransLink, which is merging with Department of Transport and Main Roads with many job losses. Whilst BrizCommuter does not wish anyone out of a job, will those accountable for TransLink's long list of incompetency and mediocrity end up on gardening leave? If what has happened in other Queensland Government departments is anything to go by, the deadwood may still remain, whilst the talent is lost.

Something also needs to be done to improve the gross inefficiencies arising from Brisbane City Council's Brisbane Transport. But is the LNP government looking after their council mates?
Posted by BrizCommuter at 1:08 PM