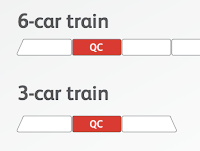 BrizCommuter readers will be aware that QR moved the Quiet Carriage from cars 1 and 6, to cars 2 and 5 on the 16th of April. Five weeks later, has this move been successful?

BrizCommuter currently uses the same morning train service on approximately 75% of morning commutes, and uses carriage 2, mainly due to it being the least crowded carriage on that service, and the doors are close to the exit at BrizCommuter's destination station. BrizCommuter hasn't moved carriages due to it being the quiet carriage, and nor have his fellow carriage 2 passengers. With morning trains often having the same familiar group of commuters, it appears that car 2 passengers have continued to use car 2, with few immigrants from the old quiet carriage. Of course, of these passengers that continue to use carriage 2, many still have their morning conversations with their commuting buddies,  many (approx. 20 in car 2) still continue to listen to music in headphones, some at a high enough volume for their dubstep drops to be heard by others. The usual suspects still yap away on their mobile. The move of the quiet carriage has resulted in no noticeable volume change in car 2, which appears to be no quieter than it was when wasn't the quiet carriage.

Why no change? Commuters are a creature of habit. As the same commuters continue to use car 2 due to it being convenient for exits, or it being less crowded (or sometimes the only carriage they can get onto), then its designation as the quiet carriage appears to have made little difference in commuter behaviour. Inconsistent signage is also not helping, with conflicting old and new signage being spotted on a quite a few trains. Supporters of the quiet carriage will continue to convince themselves that it is a success, but BrizCommuter's observations show that the quiet carriage move has not changed commuter behaviour in the slightest.
Posted by BrizCommuter at 8:30 PM