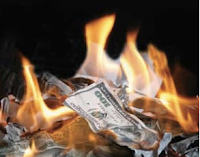 Are you one of the many people that BrizCommuter observes still using paper tickets on SE Queensland's public transport system?

If so, do you realise that for a zone 1-2 single peak period journey it is costing you $1.62 more than if you used a go card?

Did you realise that for the same single journey during the off-peak period it is costing you $2.33 more to use a paper ticket than using a go card?

If you commute from further out, a paper ticket is even more expensive compared to using the go card, up to $8.85 more expensive per single journey!!!

With the initial cost of a go card being $5 (and that is refundable) you have to be bonkers to still be using a paper ticket.

Still want to use a paper ticket? Why don't you just burn your hard earned money instead? Or maybe flush it down the toilet?

PS: Have you also noticed other commuters giving you nasty looks whilst you delay the bus when buying your paper ticket?
Posted by BrizCommuter at 11:34 AM