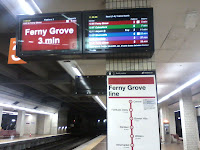 On Tuesday the 10th of April, the long awaited Keperra to Ferny Grove duplication will be completed. Trains will now be able to use two tracks between these stations instead of the old single track. Anywhere else in the world, we would be seeing a brand new timetable, with significant service improvements from the first day of opening. But not in Queensland. Unfortunately, in the "Backwards State" the tradition of spending millions on new infrastructure and then not improving train services continues.

For the foreseeable future, the only timetable changes mentioned on TransLink's website are outbound services departing from Keperra, and arriving at Ferny Grove 3 minutes earlier, and the 5:43pm from Roma Street to Ferny Grove departing 2 minutes earlier. Nothing worth getting excited about. True to TransLink's usual poor form, as of the 6th April, the new .pdf timetable has not even been published on their website, despite the publishing of the modified connecting bus timetables. Confusingly, the new 367 bus timetable shows the 07:06am from Ferny Grove will now depart at 07:04am. However, there is no mention of this train service change on TransLink's website. BrizCommuter is concerned that if this train service really has been re-timed, that many commuters will be unaware of the change and will miss their train!

Although the single track should increase peak period reliability, commuters will still have to continue putting up with some peak trains starting and terminating at Mitchelton, irregular peak service patterns, up to 23 minute gaps between peak services, and a laughably infrequent off-peak service. The mediocrity that is the Ferny Grove Line's timetable should (hopefully) be significantly improved with the belated phase 2 timetables. The LNP promised a 15 minute off-peak services, which will make the Ferny Grove Line the first branch line to run 15 minute off-peak services in SE Queensland. (Note: every line in Perth already runs trains every 15 minutes off-peak!) The duplication should also allow for a frequent all stations "metro like" peak service. The date of both the draft timetable consultation, and implementation of the finalised timetables have still not been announced by QR, TransLink, or the Queensland Government. This is leaving Ferny Grove Line passengers wondering when they will ever see the promised train service improvements.
Posted by BrizCommuter at 1:18 PM