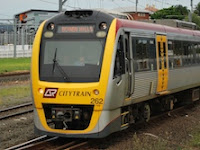 
It's very belated, but TransLInk are now consulting the public on the new timetables for the first stage of the 2011 timetable revamp. This revamp will be on the Ipswich, Richlands, Caboolture, and Sunshine Coast Lines. The consultation pages are on TransLink's new error prone website here, and include pdf draft timetables. Hopefully this consultation will prevent a repeat of the March 2008 Ferny Grove timetable disaster. If the consultation results in the need for modifications, lets hope that TransLink and QR actually take notice!
The most obvious new change is the 7-days a week, 15 minute off-peak (and reverse-peak) service to Darra. This 15 minutes service runs until late at night, where services have been improved significantly. The big question is will these 15 minute off-peak services be rolled out to other lines later in 2011?
The Ipswich Line has an am peak service every 6 or 12 minutes which runs express from Darra to the CBD. The Springfield Line runs am peak all stations services every 12 minutes, with a few 6 minute gaps as well. This is very welcome, as Richlands requires a half-decent service to attract more users to public transport. The pm peak is a homogenous split between an Ipswich express every 12 minutes, and a Richlands all stations service every 12 minutes. All trains serve Milton, Indooroopilly, and Darra. But why has Toowong been left out? There appears to be combined train per hour (tph) improvements of approx. 25% during both the peaks, which is very good news. Evening peak Rosewood services are more homogenous than at present. The Richlands service to the CBD could be improved prior to the 6:48am departure.
Tennyson trains appear to have been eliminated. This may be a good move to improve services to the masses and reduce conflicting train movements. The replacement bus service must improve upon the previous situation, and make public transport attractive to those living in new developments in the Tennyson area. Where is the replacement bus timetable in the consultation TransLink?
The Caboolture Line also has more homogeneous service patterns than at present. Sharing tracks with the Shorncliffe Line (which is having it's timetable re-written in phase 2), freight trains, and Traveltrains doesn't help the scheduling of this line. The peak service is split between Caboolture services running express from Petrie to Northgate every 6 to 12 minutes, and Petrie all stations services every 6 to 12 minutes. There are also some Sunshine Coast expresses that serve many Caboolture Line stations (included in the above frequencies), but confusingly these services are missing from the Caboolture Line timetable. TransLink, please show all services that serve Caboolture Line stations on the Caboolture Line timetable, otherwise some commuters will need to read two timetables! There is a concerning 18 minute gap after the 5:31pm from Central for those only served by the Petrie all stations services. The combined peak tph appears to have been improved slightly.
For those who choose to live miles away from where they work, the Sunshine Coast Line has received an extra am peak service,  and an extra early pm peak afternoon service.  However the new timings will be inconvenient to many users (especially the 5:16pm from Central being moved to 5:04pm). Most Sunshine Coast expresses and all Caboolture expresses now serve stations between Northgate and Albion. This will increase the journey times for outer suburban users, but will considerably improve the train service for inner suburban commuters who now have a real metro like frequency during the peaks. It should also help even out train loadings, and make more efficient use of the limited track capacity. This approach may be required on the Gold Coast Line when the Merivale Bridge capacity runs out. It should also be noted that the Mon-Fri daytime Cooroy service has been extended to Gympie.
The Shorncliffe Line has had some minor timing alterations, and destination changes, but will not have any service improvements until stage 2 of the new timetables. Lets hope that these tweaks do not make Shorncliffe's current service temporarily worse. It's a shame that the late afternoon "gap of doom" has not been filled.
To conclude, the new Ipswich Line timetables seem rather impressive. The Caboolture Line does reasonably well with the scheduling limitations, but the timetable needs to include all services so as not to cause confusion. Sunshine Coast commuters will be unhappy about the increased journey times and some re-timings. 7 days a week 15 minutes off-peak to Darra is commendable, as are the more homogenous peak service patterns. Whilst not perfect, the draft timetables are a very big step in the right direction. Users of other lines will be eagerly awaiting stage 2 of the new timetables, especially in regards  to 15 minutes off-peak services, and shortening the currently excessive peak hour gaps.
Posted by BrizCommuter at 2:01 PM