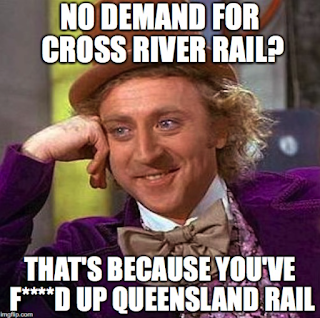 It has been reported that Queensland's opposition don't think that Cross River Rail (CRR) is required quite so urgently (in other words they would rather axe it for BaT Mk2). This is due to rail patronage allegedly declining over the last 7 years. Firstly it would be great if detailed rail patronage and passenger loading was not kept a state secret by successive LNP and ALP governments. Secondly, there are rather a lot of reasons why rail patronage (which was growing rapidly in the mid-00s) has stagnated or even dropped:

Incompetence from both sides of politics in Queensland is the reason why rail patronage is currently not increasing. Sorting out the fares, having enough drivers and trains (note: not enough NGRs have been ordered) to maximise use of the existing infrastructure, as well as reforming the bus network would likely result in significant increases in rail patronage. But do either the ALP or LNP have the guts to properly sort out the mess? It doesn't look like it.

Additionally, the Salisbury to Beaudesert corridor and the Trouts Road (North East Transportation Corridor) Line cannot be built for passengers services until Cross River Rail has been built. Both would have massive effects on reducing road congestion and serving public transport black-holes. The Trouts Road line would massively speed up rail services and increase capacity from Caboolture and the Sunshine Coast. Unfortunately, an LNP MP has stated they would rather build a new road instead of building the latter, which would be a congested car-park from day one as it would funnel onto already congested roads.

Chronic political mismanagement in Queensland is the reason why Brisbane is such a mess when it comes to transport. At a time when Sydney, Melbourne, and Auckland all building new rail tunnels, Brisbane is again looking very backwards when the state opposition does't think that CRR is required.
Posted by BrizCommuter at 7:32 AM