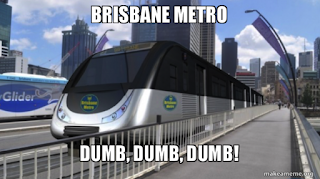 Despite Brisbane Lord Mayor Graham Quirk's Brisbane Metro idea being the worst idea since, well, the last time the LNP managed to stuff up Brisbane's public transport plans with the BaT Tunnel, Quirky is still rolling on in the land of delusion. This week we have seen a press release stating how many jobs the totally unnecessary construction will create. The SEQ Council of Mayors (purveyors of ludicrous plans such as the Cleveland Solution and the City2Suburbs bus tunnel) are also about to waste loads of ratepayers money on an advertising campaign to attempt to get the federal government to spend money on their ill-conceived ideas.

Here is a reminder why the Quirky Brisbane Metro is a terrible idea:


Please, Graham Quirk, return to the land of reality - instead of wasting billions of $$$ on something that not required, start supporting Cross River Rail and bus network reform.
Posted by BrizCommuter at 8:38 PM