BrizCommuter was not amused to see some of his ratepayer money being spent on a propaganda leaflet that has quite likely been posted to every household in Brisbane. So what is in this propaganda leaflet for Quirk's Brisbane Metro Subway System? 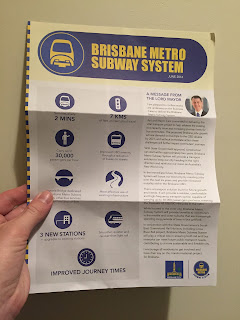 Other prize quotes include: 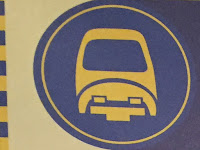 And finally, why does the logo look like a monorail? Have Brisbane City Council been watching too many Simpsons episodes?

As a Brisbane ratepayer, BrizCommuter is very concerned that the LNP run Brisbane City Council are so delusional that they are countinuing to waste rates on a business case for such a nonsense project. At a time when the urgently required Cross River Rail is struggling to get funding, it is disgrace that Brisbane City Council are still promoting his pointless idea. The Quirky Metro proposal will be a huge waste of money, and a destructive, retrograde step for Brisbane's public transport system.
Posted by BrizCommuter at 8:41 PM