Both TransLink and QR are far from perfect when it comes to providing customer information. Here is another example.

Tracks are closed from 10:45pm you say?
Train services will be affected from approximately 10:15pm you say? 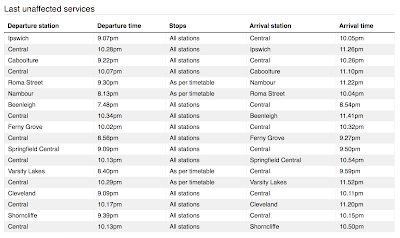 It gets worse, for those travelling into Brisbane from outer suburban areas, the last train from Varsity Lakes is 8:40pm, the last train from Nambour is 8:13pm, and the last Beenleigh Line train departs at 7:48pm - a whopping 2 hours and 27 minutes before "services are affected".

BrizCommuter suggests that in this case the statement should say "trains services will be progressively replaced by buses from 7:48pm"?