What is Tony Abbott's problem with trains? 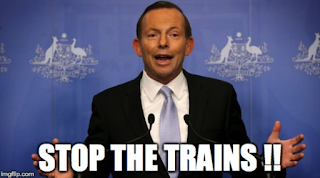 
Unfortunately, Australia's budgie smuggler wearing, misogynist, homophobic prime minister Tony Abbott refuses to fund public transport infrastructure projects from federal funds. This stuck in the 1950s policy, makes Australia look backwards compared to pretty much every other developed country in the world which is now investing in public transport over roads. Whilst road spending is still important, there have been many studies shown that investing in urban road infrastructure does not resolve congestion.

So why does Tony Abbott have such a hatred for trains?
There is little question that unless Tony Abbott has a policy U-turn on federal funding for public transport, then he will be crippling Australian cities economically and environmentally for decades to come.
Posted by BrizCommuter at 2:36 PM