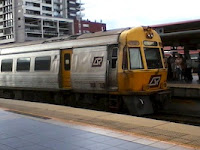 In what appears to be major breakthrough in QR and TransLink's brick wall of transparency, the QR Passenger Load Survey for Q1 2011/12 has been released. The last load survey to be released was for Q3 2008/9 (titled Q1 2009 as previously QR used calendar quarters as opposed to financial year quarters), apparently in response to a Right to Information request by a journalist. Since then, the survey has been unpublished, convenient as it coincided with the run of huge fare increases that have severely stunted the growth in public transport patronage. BrizCommuter welcomes the release of this information, and hopes that TransLink and QR now publish all future passenger load surveys.

Unfortunately as this survey is for Q3, the results cannot be easily compared with the previously published Q1 survey. The survey taken from late August to late September also ran into the quieter school holiday period (and university holidays), with some re-counts thus being performed in early November (which happens to be the university exam period). With this in mind, the results may be a slight underestimate. Of course, it should be remembered this this survey is only a "snapshot" in time of am and pm peak services, and thus figures (particularly on quieter stations and lines) can be quite variable.

How did the lines with new timetables perform? It is clear that the Richland Line has been a success with 1212 passengers in the am peak. Darra which is served by all Ipswich and Richland Line services every 3-6 minutes in the am peak has had a massive 42.6% increase in the am peak. This shows that it you provide a good service, people will use it. Surrounding stations such as Oxley, Wacol, and Corinda have seen decreases in patronage due to passenger redistribution, but overall it appears that there has been a increase in train patronage in this area. The excellent new Caboolture Line timetables appear to have resulted in a large patronage increases, in particular at Dakabin which has recorded a 40.6% increase. Aside from around Darra, patronage on the Ipswich Line was rather disappointing with little or no growth. It should be noted that the only am peak patronage increases in the last year on the inner Ipswich Line were at the stations served by all services - Indooroopilly and Milton. The new timetable generally appears to have decreased overcrowding on the Ipswich and Caboolture Lines which shows that phase one timetables were a success in terms of overcrowding.

What about the lines still awaiting a new timetable? Patronage growth is generally disappointing compared to the previous years of high growth until the 15% fare increases started. Most sectors recorded decreases in patronage in Q1 2010/11, with some sectors rebounding somewhat in Q1 2011/12. Impressive growth is noted on the Gold Coast Line with a 14.1% increase in Q1 2011/12. It appears that initially most of Varsity Lakes patronage moved from the previous terminus of Robina, but in the last year all Gold Coast Line stations have seen further patronage increases. With no infrastructure projects on the Gold Coast/Beenleigh Line this side of the phase two timetables, BrizCommuter is doubtful that the number of peak services can be increased. This is likely to continue to increase the "overcrowding" figures on the line, caused by a small number of passengers having to stand from beyond Beenleigh to Brisbane. The Ferny Grove Line has also had an am peak patronage rebound in the last year of 7%, but pm peak has decreased two years in a row. It appears that users of stations also served by buses (Windsor, Alderley, Enoggera, Gaythorne, and Mitchelton) are increasingly using the bus instead of the Ferny Grove Line's mediocre pm peak timetable. BrizCommuter is one of these statistics. With the highest am peak standing overcrowding figures, the duplication to Ferny Grove and phase two timetable cannot come soon enough.

Lets hope that this is a start of TransLink and QR being more transparent with their customers. BrizCommuter is looking forward to seeing the release of the Q3 2011/12 passenger load survey in 6 months!