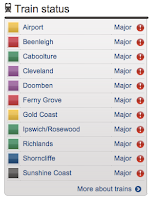 BrizCommuter has just got back from holidaying abroad, to be welcomed by one of the biggest public transport meltdowns in Brisbane for some time. At around 11:45 a power failure caused by a suicidal pigeon shut down the inner city rail network, which as most commuters know consists of 2 track pairs (4 tracks). All tracks were shut down until just after 3pm, and at the time of writing it looks like 1 track pair will still be out of action for the rest of the evening.

During the shutdown, trains were sensibly started and terminated at Roma Street to the South, and Bowen Hills to the North by QR. Suggestions by foamers that the Ekka Loop should have been used are somewhat laughable as it would have significantly added to operational problems, confused commuters, and further delayed freight services that use this busy section of track.

BrizCommuter's journey home was relatively unaffected, catching a Ferny Grove train after only a 3 minute wait at Fortitude Valley. However many other commuters were not so lucky, with reports of commuters being held at fare gates at Central due to overcrowding on the platforms. This would be rather annoying if the next train was going was going to the destination of someone who cannot get onto the platform due to overcrowding! BrizCommuter also shudders to think how many passengers may have missed their flights at Brisbane Airport due to the rail shutdown.

It is quite obvious that if Brisbane had Cross River Rail, then the public transport meltdown would have been no where near as bad, as many commuters would have had an alternative route into and out of the CBD. This case again highlights that Cross River Rail is urgently required.

BrizCommuter has a few tips for those who are delayed in similar train meltdown situations:


Update 23/09/2011
In London, if there is a major delay to the tube of more than 15 minutes, you get your fare refunded. Commuters will also get an apology/explanation on a notice board at stations the next day. What do commuters get in Brisbane after a major delay? Nothing. Yet another reason why Brisbane does not have a "World Class" public transport system.
Posted by BrizCommuter at 7:56 PM