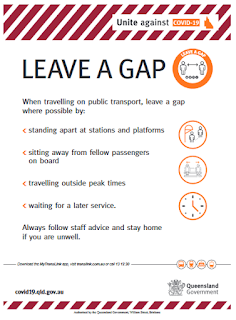 COVID-19 has caused a massive reduction in public transport patronage in Brisbane, as with most other cities around the world. BrizCommuter commends TransLink and Queensland Rail on continuing to run a full train service during and after the lockdown period, which allowed commuters to continue safe social distancing.

Now that patronage is slowly returning, it is time to think about how COVID-19 and its fallout may affect public transport and services. It is likely that due to the slow recovery from high unemployment, a permanent shift to working from home for some workers, and fear of catching viruses on public transport, that patronage will not recover to pre-COVID levels for many years. However, BrizCommuter doesn't think that now is the time for authorities to see this as an excuse to do nothing. In fact, now may be a good time to optimise the train services on the existing train network, not only to make using public transport for attractive to commuters, but also make some services less crowded to increase consumer confidence. Due to social distancing becoming the new normal, the goal posts have moved on what is deemed a "too busy" train service by the general public. It's impossible to cost effectively run public transport whilst achieving "safe" levels of social distancing, however public transport systems should making the most efficient use of their resources to reduce crowding. So what needs to be done to optimise the existing train network?
So how can the existing rail network be optimised?
The sad reality though is that the  COVID-19 situation is more likely to result in inaction  on improving public transport, increasing the risk of Brisbane's rail network falling further behind other Australian and New Zealand cities, and increasing the likelihood of Cross River Rail Fail.

Posted by BrizCommuter at 9:05 PM