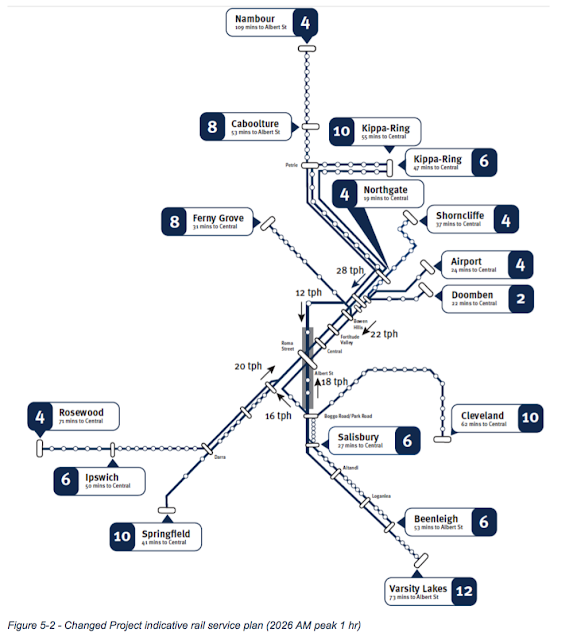 Cross River Rail (CRR) is currently scheduled to open in 2024, and the above service plan for Cross River Rail is proposed for 2026 (am peak). The current state of play shows that this may not be possible due to the following:

Without sustained driver (and train crew) recruitment throughout the next 5 to 7 years, timely orders for approximately 42 additional 6-car trains, and multiple expensive infrastructure projects, it will be impossible to achieve to proposed service patterns for Cross River Rail when it opens in the mid-2020s. Failures in any of these areas will result in a repeat of Rail Fail where there were insufficient drivers and trains to operate the October 2016 timetable after the opening of the Redcliffe Peninsula Line. This would result in a repeat of sub-optimal train services on both the existing train network and on train lines that that will run through CRR. Failure to meet the 2026 service pattern would also make a mockery of the business case, which is already dubious by claiming that CRR will allow for service improvements on the unconnected Ipswich and Springfield Lines. Given Queensland's track record of blundering transport planning, and minimal progress since BrizCommuter raised the issue of Cross River Rail Fail a year ago, things are not looking good. In fact, expect this blog post to be repeated verbatim next year with little progress.
Posted by BrizCommuter at 8:36 PM