Slip'n'slide on the Cleveland Line 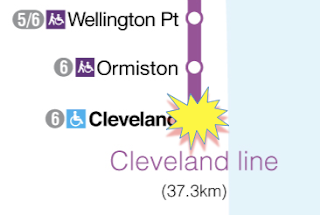 The preliminary Australia Transport Safety Bureau (ATSB) report into the Cleveland train crash has now been released. The cause of the crash was not a total brake failure as the "hysterical" unionists claimed, but due to poor rail adhesion from leaf fall and light rain. Multiple trains had experienced adhesion issues around Ormiston station that morning. When the driver of train T842 came to brake at Cleveland, the train failed to sufficiently slow down, sliding through Cleveland station and into the mens toilets at 31kph, injuring many passengers.

Poor rail adhesion is a known issue in many temperate climates (such as the UK), particularly during the leaf fall season, which is not an issue in Queensland where deciduous trees are rare. However, Queensland does have a storm season where leaves and other vegetation can fall onto the tracks as occurred just before the Cleveland crash. Blossom falls could also potentially cause issues from Autumn through to Spring. Even migrating caterpillars have been reported to cause rail adhesion issues in Australia.

Also, most new trains (including Queensland Rail's class 160 and 260 trains) have brakes on disks on the side of the wheel, instead of tread brakes on the actual wheel tread. This means that the wheel tread is not cleaned (or partially cleaned) of slippery substances during each braking cycle.

So what can be learnt from UK rail operators who appear to survive the leaf fall season with no crashes?

BrizCommuter is dissappointed that the ATSB report does not address the dangerous terminus design with buildings immediately beyond the end of the track, and lack of modern train arrestors. However, it should be noted that QR's potentially dangerous lack of Automatic Train Protection (ATP) would not have prevented this crash.