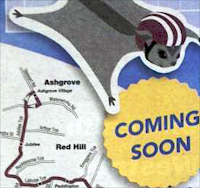 With such wasteful politically driven decisions, it is time that Brisbane Transport is privatised and Brisbane City Council's remaining public transport control is handed over the State Government and TransLink. Once again, the CityGlider logo (in photo) is wearing a crash helmet, as it is surely banging it's head against a brick wall!

Continuing the tradition of mediocrity in SE Queensland public transport, the Maroon CityGlider's starting date was only announced 6 days before the start of the service.