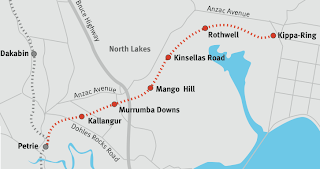 It has been reported in this Courier Mail article, that the Moreton Bay Rail Link (MBRL) from Petrie to Kippa-Ring will be fast tracked in the federal budget. No new timeframe was mentioned. $133m of funding will be brought forward, with $30m of that to be spent this financial year. BrizCommuter can only assume that the other benefactors of the project will also bring forward their funding. Whilst this is excellent news for long suffering (circa 100 years) Redcliffe commuters, BrizCommuter is concerned about the lack of rail capacity through the CBD to support this project, particularly as the MBRL will open at least 4 years before Cross River Rail. The peak MBRL train services will probably be an extension of the Petrie starting services, of which there will be from June, up to 9tph in the am peak. These will alternate with Caboolture/Nambour starting services, resulting in up to 18tph running on just two tracks between Northgate and Roma Street, through Central #5. This is pretty much the maximum capacity of the "mains" tracks. Hopefully the June 2011 timetables will reduce overcrowding enough, so that despite patronage growth before MBRL opens, there is still spare capacity for MBRL commuters to be added to the system. If any of these services are overcrowded after the June 2011 timetables, then it won't bode too well for commuters using the Kippa-Ring services!

Transferring services from the "mains" to the "suburbans" tracks south of  Northgate will not help matters, as the next "suburbans" timetable (occurring who knows when?) is likely to fill up most track slots with services from Shorncliffe, Doomben, Airport, and Ferny Grove. The opening of Cross River Rail will allow for some (suboptimal) track swapping in the vicinity of Bowen Hills, freeing up track slots through the CBD. Combined with a duplication and extra services to Shorncliffe, this will allow Caboolture/Nambour/Kippa-Ring services to skip stations between Northgate and Albion. This will free up more spare capacity on Caboolture/Nambour/Kippa-Ring services despite there being no increase in service frequency.

Cross River Rail will also provide more rail capacity for rail services to another urban sprawl central - Flagstone new town. Failure to provide decent public transport to this satellite town within a reasonable timeframe will result in yet more car dependence. There is thus little question that Cross River Rail needs to be urgently brought forward as well as the MBRL!

In other news, this Courier Mail story mentions that the car obsessed and public transport phobic Brisbane City Council, has passed new planning guidelines to increase the number of car parking spaces in new commercial and residential developments. Whilst planned increases in population density are welcomed by BrizCommuter (urban sprawl is not the solution!), the expectation that cars will be primary mode of transport for high density dwellers is yet another step towards Brisbane having an unsustainable transport future!
Posted by BrizCommuter at 11:19 AM