Queensland Rail - The End is Nigh! 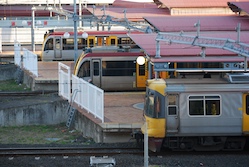 It has recently been announced that at the last minute,  $3.6m worth of bonuses was stopped from being paid to senior Queensland Rail (QR) managers by the Queensland Government. How on earth QR's Board (update: some of whom have now resigned) could think that bonuses were appropriate is beyond anyone who actually has to suffer from using QR's mediocre rail service. It is also concerning that this wasn't picked up early by Transport Minister Mark Bailey - maybe he wasn't checking the right emails? So why shouldn't QR's managers get bonuses?

Other things wrong with SE Queensland's rail network, that also have successive state governments, and the Department of Transport and Main Roads (TMR) to blame are:
Until Brisbane and SE Queensland has a train service as frequent and reliable as other major Australian capital cities, there is no way that anyone in QR or TMR should be paid a bonus. With QR's failures and poor efficiency, it should even be questioned as to why QR should not be privatised.  BrizCommuter will not be surprised if this happens within minutes of the LNP next gaining power in Queensland.

Posted by BrizCommuter at 2:31 PM